Is the Internet making us less empathic? asks UCLA researcher Gary Small. And then you have Jean Twenge who talks about a new generation called Generation Me. 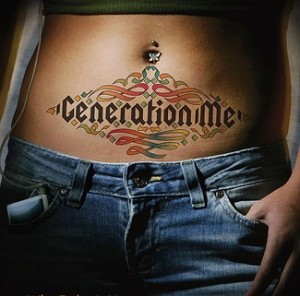 With all of these blanket statements in magazine articles and books, it’s hard to discern the truth at some point.  Sifting through all of this information can often cloud one’s own view of reality.  Are youth really narcissistic?  Is it really because of Facebook? MySpace? YouTube? Because they have me-centered titles? Since when does narcissism have anything to do with putting up pictures of yourself? I thought we have been taking pictures for more than a hundred years! What does it have to do with narcissism, rather than capturing moments and expressing art? Narcissism is a disorder, defined in the DSM IV.  Not simply an adjective that can be tagged onto a generation of teenagers simply because they couldn’t speak for themselves when these ideas were in the process of being expounded upon.

In fact, these are not only blanket statements  – but seem to be using teenagers as scapegoats for other problems in society. You cannot blame teens if they are less empathic or if they exhibit what seems to be a self-centeredness.  They can still be taught to care for others. You cannot blame the Internet for a lack of empathy. If anything, it’s people’s own choice to sit in front of their computer screens rather than go out and see each other face to face, and actually learn social skills. It’s all about how things are phrased.

I do believe that empathy has a link with cyberbullying – and more and more studies are showing this link. Those who engage in cyberbullying have been found to lack empathy for others. Of course, the Internet also creates a barrier – so that the other person’s reactions or nonverbal cues are absent. It creates an environment in which there is, what John Suler (2004) calls the “online disinhibition effect” – where people just let themselves go, because there is no face-to-face contact with the person they are communicating with. Whether or not being disinhibited has anything to do with empathizing with someone or cyberbullying is another story. If one is disinhibited, it would seem that she or he would disclose more personal information and would not be afraid of being judged – due to the anonymous nature of the online environment. However, many researchers find that youth do not differentiate between the online and offline environment. Youth, born into a digital world, have only known an era in which digital technologies and social media have been present and functioning. They weren’t alive in the pre-Internet era. In this case, I’m not sure whether being on or offline makes any difference in terms of how one’s inhibitions are playing out.

In any case, I think it’s very important that empathy (understanding others’ feelings and expressing concern for them) be included in the curriculum and also that cyberbullying be prevented through school curriculum and not through one-shot, add-on programs brought in to raise awareness as part of a one or two week campaign. Empathy training is needed – not only to be discussed – but to be experienced. Youth need to empathize with others and not just learn about what empathy is. They need to travel to different parts of the world and see what poverty is. They need to experience different cultures and world views. And there is no reason why they shouldn’t in Quebec anyway – when the educational mandate includes an ethics and religious culture program and a spiritual care and guidance and community involvement service. These opportunities should be provided to them.

I really like what this South Bronx teacher has initiated with her students in terms of teaching them empathy.

For more on cyberbullying, feel free to visit my website: digitalrespect.ca